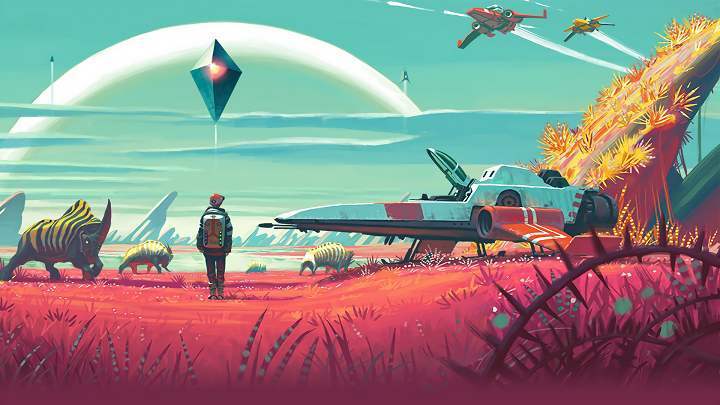 No Man’s Sky is a survival game full of action and adventure. It is a indie game developed by Hello Games.

The game released on August 9, 2016 worldwide.It is available for PS4 and Microsoft Windows.

No man’s sky features the gameplay of an unlimited open world universe.This game has 18 quintillon planets to itself.Don’t know what quintillon is? 1 quintillon = 1000000000 billion. So yes,the game has literally 1.8×1019 planets in it.Mind blown,right? But the best part is that all this planet have their very own environment.So you won’t be bored thinking all the planets look the same.

The players can create their own avatars and roam around the universe of No man’s sky. By exploring, players gain information about the planets that they can submit to the Atlas, a universal database that can be shared with other players of the game. Players get compensated in in-game currency every time new information is uploaded to The Atlas. Players also gain materials and blueprints to upgrade their character’s equipment and purchase a variety of starships, allowing them to travel deeper into the center of the galaxy, survive on planets with hostile environments, interact in friendly or hostile manners to computer-controlled space-faring factions, or trade with other ships. Some activities, such as killing too many lifeforms or draining too many resources from planets, will draw the attention of patrolling robotic Sentinels that will attempt to kill the player-character.