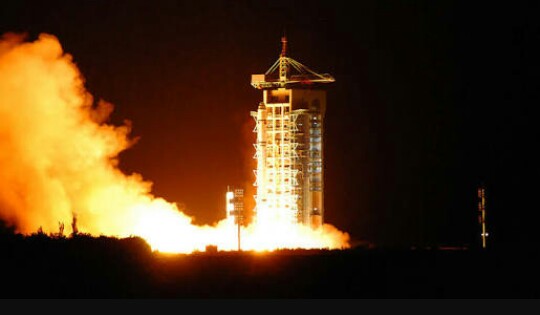 In this blog, I’m gonna introduce you with  the very latest invention of modern science. Say hello to Quantum Satellite!
The typical Internet system with which we’re used to is gonna change within a decade. Scientists’re trying to establish an ultra secured Internet system through quantum communication transmitting uncrackable keys from space to ground.The scientists of China have achieved a pinch of success on this field. last week China has launched the very fast quantum satellite of the universe!

Here’s a quick refresher in case you haven’t thought about physics in a few months because this story is cooler when you understand these basics. Skip ahead if you’re already a quantum geek.
Most human technology is built around the classical physics that Isaac Newton and his inheritors came up with (equal and opposite reactions, that sort of thing). When engineers hit on electricity, they perceived it in aggregate as a kind of a force; it’s either on, or it’s off. This understanding led to electric switches, which became transistors, and when you put all those transistors in a box and start turning them off and on with instructions encoded “11010001101”… it’s a computer.

But as scientists were developing electric computers in the 20th century, theorists beginning with Max Planck were ripping up the rule books. Their experiments with light suggested that something about classical physics didn’t quite add up. Soon they developed mathematical proofs to explain that the tiny particles that make up matter—protons, neutrons, and electrons—don’t necessarily behave like you would expect particles to behave. They can act as if they are in two places at once, for instance. (That’s one of those “bizarre features” the Chinese are talking about.) This is quantum theory. The first and most famous application of these ideas came in nuclear weaponry and energy.

Physicists are still trying to agree on how classical and quantum physics come together coherently. But quantum theory already underlies a lot of modern technology; the transistors on a silicon chip, in fact, wouldn’t work without it. Now engineers are trying to apply it to more futuristic things.

Spooky Action At a distance: 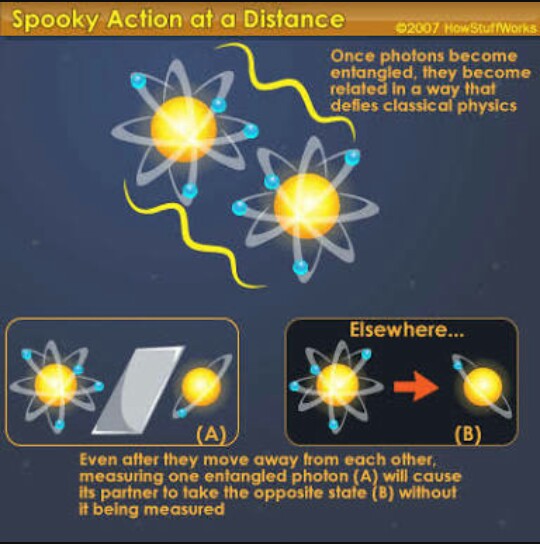 Let’s say that you take a very small particle, and set it up so that it could be in either one of two states. Let’s call one state “up,” and the other one “down.” (Quantum computers do something like this, using single atoms trapped in a magnetic field to represent either a “0” or a “1”.)

If you do this, quantum theory says that two things will happen. The first is that, although the particle will always be either “up” or “down” if you look at it, when you’re not looking, it will be in a kind of combination of the two, called a superposition. In quantum mechanics, the act of measuring something changes it; the superposition “collapses,” in the parlance, to either up or down.

The second thing is that two or more of these particles can be put in a situation of “quantum entanglement,” where they form a single superposition together. Then their physical properties are correlated. For instance, you can set them up in advance so that if you look at one particle and find it’s up, then you know, without looking, that the other must be down, and vice versa.

Here’s where it gets really interesting. Let’s say you entangle two particles. Then you move one of them far, far away—to the other side of the planet, or to the moon. No matter the distance, quantum mechanics says, they remain entangled. If you look at the first one, and in doing so change it—collapsing the superposition—you will also change the other one. And this will happen instantaneously, however far apart they are.

Let that sink in, because this technique, called “quantum teleportation,” is crazy to think about. Light has a speed limit, and normally information cannot travel faster than light. Quantum teleportation is, in a sense, information traveling outside of space and time. Einstein called it “spooky action at a distance.”

Tangled up in Space:

Scientists have done experiments with quantum teleportation already. They have instantaneously exchanged information about the quantum states of photons, which are particles of light, transmitted 143 km between two of the Canary Islands.
But testing quantum teleportation at extremely long distances requires going to space. It’s the easiest way to set up laser communication between two distant points on the earth’s surface. That’s what the Chinese satellite, developed in cooperation with the Austrian Academy of Science , intends to do.

The satellite contains a machine that generates entangled pairs of photons by shooting a laser beam through a specially designed crystal. Each entangled pair will be split up and beamed down to stations on Earth approximately 1,200 km apart. If all goes as planned, researchers at those stations will share access to an entangled system. Any measurement on one of those photons will be instantaneously reflected in its opposite number at the other station.

A US company had partnered with researchers in Denmark and Singapore to launch a small satellite, or cubesat, with similar goals, but it was destroyed when the rocket taking it to the International Space Station exploded in 2014 .

The key is the Key:

Besides demonstrating a super-long entanglement, the scientists working with the satellite want to test new communications technology. It’s important to realize that we can’t send information like “Hey, how are you?” through quantum teleportation, much less teleport actual things. But smart thinkers realized that being able to share basic information about the state of atomic particles across distance could create a powerful encryption tool.
This is where the unbreakable code comes in. Perhaps the most powerful method of encryption is the “one-time pad,” where messages are encoded using a private key known to both parties; theoretically, if the key is random, is as long as the message, is never reused, and is kept completely secret, it cannot be broken. Which sounds really good, code-wise, but it has long been impractical to ensure that two parties can always access a key that meets those standards.

Quantum entanglement could help. If people on two ground stations share access to a large enough set of entangled photons, beamed to them from a satellite in space, they can generate a sufficiently long, random key by teleporting quantum information between the entangled particles.

Nobody would be able to detect the transmission of the key. “It’s very secure from the point of view that if your eavesdropper wants to listen in, usually they are within space and time,” Michalakis says. “The data is not transmitted through space time, it goes underneath in mathematical subspace.”

Once the people in the two stations have created a key, using their entangled particles, they can use it to encrypt a message. This can be sent by whatever method they want. “You can use a telephone the moment you are sharing a key that nobody has access to,” Michalakis says.

But what if someone managed to intercept the laser beam from the satellite that had originally shared the entangled photons between the two stations? Here’s what is truly amazing: Thanks to the laws of quantum mechanics, any attempt by a third party to measure the particles in the entangled system would be immediately detected by the other two, making them aware that their code could be broken.

The field of quantum information is still in its infancy. As we continue to learn the fundamentals of how quantum phenomena work at a large scale, the data collected will help physicists understand the process that takes you from the quantum richness of the universe to the classical world we see around us.
It may be easy to see in this shades of the Cold War race for technological dominance,  we hope that research will be shared within the scientific community. This experiment is the first step toward a global network of research facilities sharing access to entangled particles beamed down from space—a kind of global, cloud-based quantum computer.